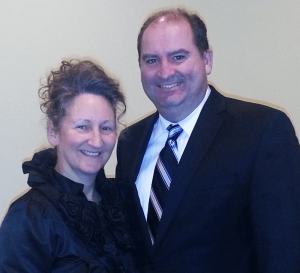 Rev. Jerry Myers began serving as Pastor of Calvary United Pentecostal Church in 2017. He is passionate about growth and revival in the greater Statesville, NC area.

Pastor Myers was born and raised in Advance, NC and was a faithful member of Heavenview United Pentecostal Church in Winston-Salem, NC. Under the leadership of Pastor Harold Linder, he served many years in ministry as an Elder, Trustee, Bible Teacher, Marriage and Family Minister/Counselor, and LifeGroup Leader. He is a graduate of Appalachian State University where he earned his B.A. in Political Science, and Liberty University, where he earned his M.A. in Professional Counseling. He has been involved for several years in the mental health field working with individuals struggling with various life issues and crisis situations.

In 1997, Jerry married his wife, Brenda, and they have two beautiful children, Alexandra and Grant.

Brenda Myers is a 4th generation Pentecostal, born and raised in Oklahoma. She is a graduate of Gateway College of Evangelism (now Urshan College), and was employed by the United Pentecostal Church International for 17 years, working for the Pentecostal Publishing House, and Global Missions. While in St. Louis, she was a member of New Life Pentecostal Church under Pastors Guy & Jim Roam and Pastor Jerry Jones, where she served in many roles in the music and youth departments.

Brenda married Jerry and moved to North Carolina in 1997 where they attended Heavenview United Pentecostal Church. Brenda has been heavily involved in music ministry and has served as the Children’s Choir Director, LifeGroup leader, marriage group leader, and bookstore administrator.  She has worked for many years in the field of Risk Management and Human Resources. She is the proud mom of Alexandra and Grant.